The Xandros distro was okay at first (IceWM brought me fond memories of the year 2000, when I used it). Then I started longing for Firefox 3 and the aesthetics of GNOME applications. Finally, when apt-cache search told me there was no SSH server package available, I gave up and installed Ubuntu Eee from a SD card. The software selection is incomparable (Asus/Xandros: 870 packages available, according to apt-cache stats. Ubuntu: over 30,000 packages.) Also, yay rotating cube desktop!

Things that are bad:

My workhorse, a 14" Lenovo T61W, now seems huge by comparison: 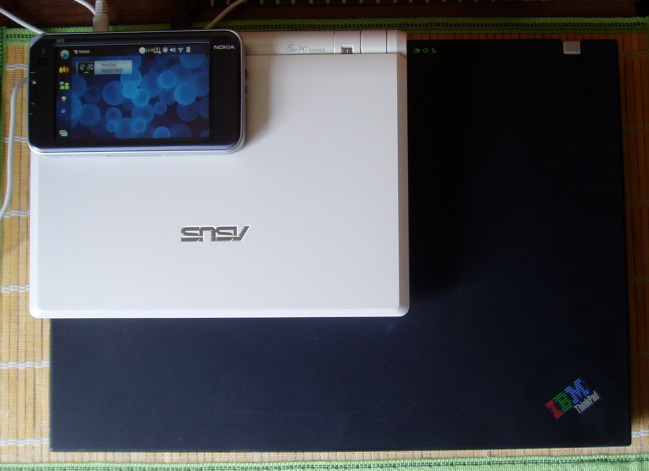 I'm not going to stop using my N810 (which fits in a pocket, has a much longer battery life, and is more convenient for e-books or NumptyPhysics). I'll stop lugging my T61W around instead and start leaving it at work. The EeePC is an almost-perfect travelling laptop.

The upcoming Asus EeePC 901 is going to fix the lack of internal Bluetooth and the battery life. I wonder when it will become available in Lithuania. (The 900 is displayed in almost every electronics shop here. Yay Asus. Boo Nokia for not doing this with its Internet Tablets.)