I am grateful to Travis CI for providing many years of free CI service to all of my FOSS projects. However the free lunch is over and I don’t want to constantly ask for free build credits by email (the first 10,000 ran out in 10 days).

I’ve chosen to migrate to GitHub Actions. There are already helpful resources about this:

In fact part of the difficulty with the migration is that there’s too much documentation available! And all the examples do things slightly differently. 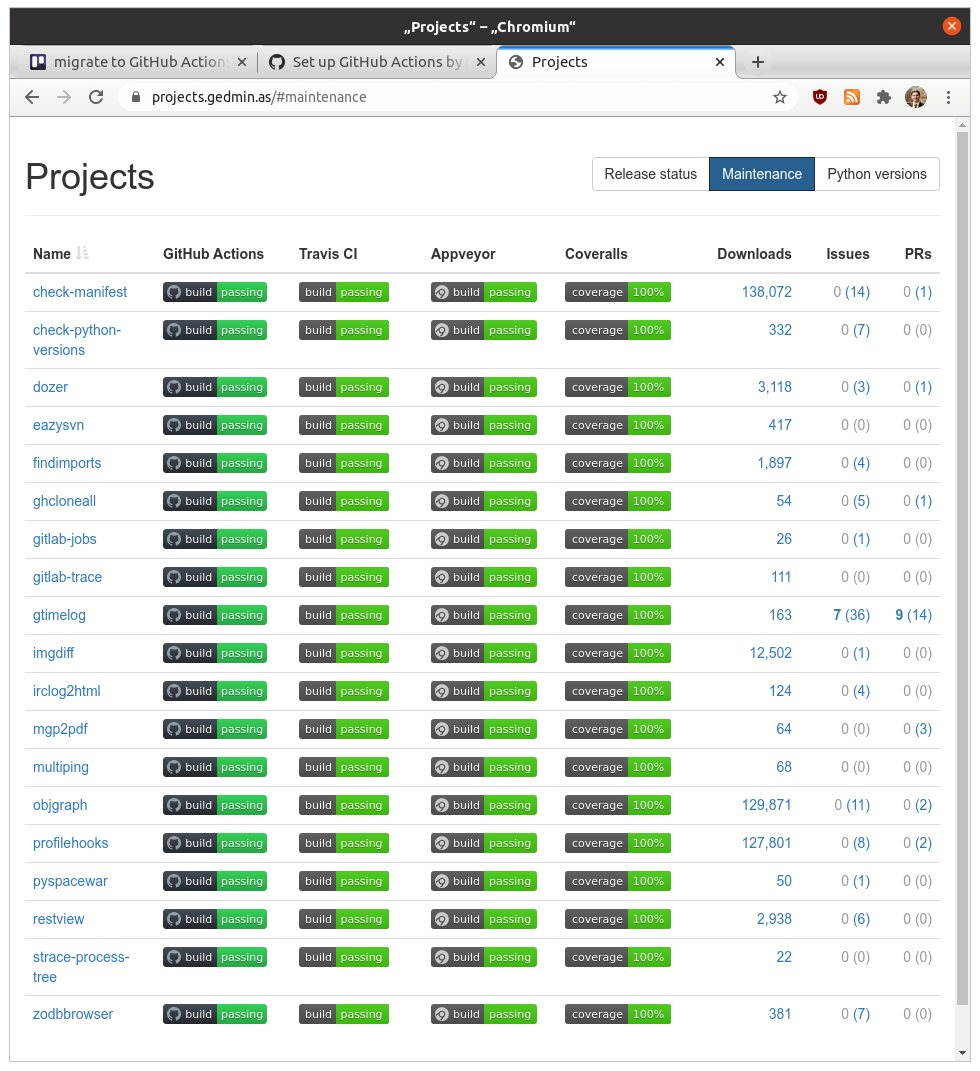 So here’s a bunch of tips and discoveries from converting over 20 repositories:

Now that Ubuntu 20.04 LTS is out, it was time to update my bootable USB drive with a bunch of ISO images. Except I got tired of editing grub.cfg by hand. So I wrote a script.

Now all I have to do is plug in my USB drive, download a new ISO into it, run make in the /boot/grub subdirectory, and presto! It works.

What the script does:

This works for all Ubuntu ISO images based on casper, which is a tool Ubuntu uses to produce their LiveCD images.

Notably it doesn’t work for older Ubuntu server images based on debian-installer.

The time has come to replace my trusty ThinkPad X220 with something more modern (that has enough horsepower to run Subnautica). I picked a ThinkPad X390 for the usual reasons (it’s a ThinkPad, it’s small and light and portable, the keyboard is reasonably sized, it has a trackpoint).

I installed Ubuntu 19.04 from a USB stick. This time I did not wipe Windows (because Subnautica), which gave me an unpleasant surprise: the Ubuntu installer does not allow you to enable full disk encryption if you’re using dual-boot.

Everything works great on Linux, except for the fingerprint scanner (a Synaptics device with ID 06cb:00bd in lsusb). Good news: Huang Vincent from Synaptics is working on a driver, so stay tuned!

The 13” 1920x1080 screen at ~160 dpi is a bit uncomfortable to use with my poor eyesight, so first I tried to use GNOME Tweaks to scale fonts to 120%. This worked okay-ish (a shame that Firefox ignores this and I had to tweak it separately) until I plugged in an external monitor (~80 dpi) where the large fonts were cartoonishly too large. Next, I enabled GNOME’s experimental fractional scaling support (I use a Ubuntu on Wayland session instead of the default one) and (after a reboot) set the zoom level on the internal screen to 125% (after resetting font scaling back to 100%, of course). Wayland apps look nice and crisp, X11 apps (Firefox) look fuzzy, but shrug at least I can read the text without squinting.

Surprise: I don’t hate the new keyboard! It took a while to get used to (and I caught myself using vim’s 0/$/^F/^B instead of Home/End/PageDown/PageUp way more than I usually do). I’m not sure why the backlit keyboard has two different light levels instead of just one. The mute LEDs on the F1 and F4 keys are too bright, especially at night, so I turn down the volume to the lowest level instead of muting. (The power LED is also a bit too bright – why did Lenovo make it white instead of the traditional nice green?)

I like the nice little physical camera switch that moves a little builtin plastic cover over the lens so I can be sure nobody’s spying on me :)

Things were less smooth on Windows 10: first it didn’t want to reboot (I waited like 20 minutes at the blue “Do not turn off your computer” screen before YOLOing the Power button for 10 seconds). Next, Bluetooth didn’t work (scanning for visible devices to add failed after a fraction of a second) until I updated the driver (Device Manager -> Bluetooth something something -> right-click -> Update driver) and/or installed Windows updates and rebooted. Other than that Windows 10 was a pleasant surprise – not something I could love, but at least something I don’t hate.

Subnautica runs … at 20 fps, using the lowest graphics settings. That’s integrated Intel graphics for you. (This was a deliberate choice: I want Linux compatibility more than I want to run games, so I avoid NVidia.)

It’s 2017, so it’s time to make this blog HTTPS-only, with permanent redirects and HSTS headers and everything.

Apologies to any planets that might get flooded when the RSS feed changes all permalinks to https.

(P.S. Hugo is a pain, as I expected. Content-Security-Policy headers are also made of pain, so I’m skipping one for this blog right now.)

I haven’t used configuration management tools in a very long time because I didn’t know which tool to pick (Chef? Puppet? Ansible? Salt? cfengine?). Now I use Ansible and am very happy with it.

Here’s how you start – with an empty git repository:

Let’s start by making sure a couple of Ubuntu servers will have unattended upgrades enabled. First we tell Ansible what the servers are