One of the reasons I wanted to come to the Foliage sprint was to get acquainted with the brave new world of Zope 3 eggs. For this reason I chose to work on package dependency simplification.

I spent a couple of hours reading setuptools documentation, easy_install and zc.buildout source code, trying to figure out the right way to extract dependency information from a set of eggs. Then philiKON mentioned tl.eggdeps to me. Yay!

Running it on z3c.formdemo produced a huge and unreadable graph. The original was 14153x2729 pixels, here's how it looks when zoomed out:

The text version of the dependency tree was better, but not too convenient either. I got the idea of an interactive dependency tree viewer so that I could expand only those parts I'm interested in and ignore the others. That's what I worked on for the rest of the day: 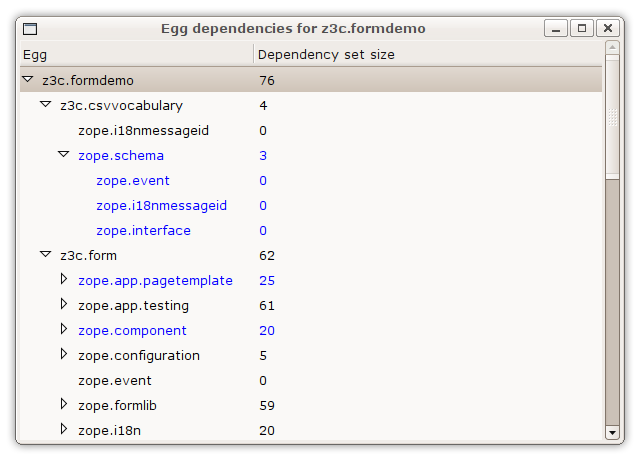 You can easy_install gtkeggdeps and inspect the dependencies of all your installed packages.